In 1975, Dr. Maurice Hiles embarked on a series of bold and fascinating human experiments. He had electrical probes surgically implanted into his own leg, thus becoming a human test subject. These probes measured the effect that running and walking have on the human body.

The results of his experiments were surprising – they showed that the body could be subjected to up to 17 Gs of dangerous force when running. Dr. Hiles began working on a material that could absorb harmful heel-strike shock before it entered the body. This new material would also need to possess excellent memory and the ability to perform over a long period of time.

Patterned after the body’s own shock absorbers, human flesh, and the calcaneal fat pad, Dr. Hiles named his new synthetic material Sorbothane®. Dr. Hiles’ unique viscoelastic material was awarded a 17-year patent and its initial application included the development of shock-absorbing Sorbothane Insoles to protect the body from harmful shock. A one-of-a-kind viscoelastic polymer, Sorbothane was first introduced to the American consumer in the early 1980s.

The Sorbothane Full Sole Insert and Heel Pad were the first shock-absorbing insoles developed for the athletic and orthopedic markets. The performance of Sorbothane Insoles surpassed expectations and helped to establish the premium insole market in the United States.

ONE OF A KIND! Sorbothane is the Difference

Sorbothane is a unique material that, combined with proper ergonomic design, cradles the foot in comfort and helps protect the entire body. Sorbothane won’t bottom out like other insole materials. Durable and long lasting, Sorbothane Comfort & Performance Insoles ensure cushioning and protection step after step.

In 1980, the Sorbothane Heel Pad was featured in Nike “Equator” running shoes and Nike studies confirmed that Sorbothane absorbs up to 94.7% of impact shock. Sorbothane engineers have perfected a production system that allows for multiple materials to be cast within one layer.

The Ultra Sole™ combines a molded air-infused foam base with a unique Sorbothane heel inlay designed to provide pure comfort and impact protection. The Sorbothane Gel forefoot pad adds cushioning and assists with push off.

After a full year of planning, Dr. Barry Newton Ph. D. was on his way to climb Mount Kilimanjaro. The problem was that the airlines lost his luggage. Dr. Newton was forced to borrow a pair of discarded, worn-out boots. Fortunately, he had a pair of Sorbothane Insoles in his dress shoes. The Sorbothane Insoles made the tattered boots comfortable and stable, and the climb was a complete success.

Sorbothane, Inc. began the direct distribution of Sorbothane Perfomance Insoles to the retail sporting goods and shoe industry in 2013. A superior American-made insole going strong, Sorbothane offers a full line of premium insoles designed for active people in all walks of life.

A History of Sorbothane Insoles 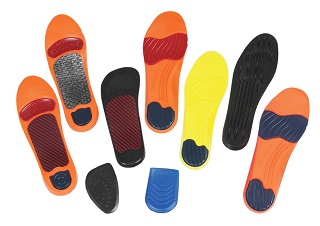 View our whitepaper on the evolution of Sorbothane in sports medicine.